Amanda and the Alien 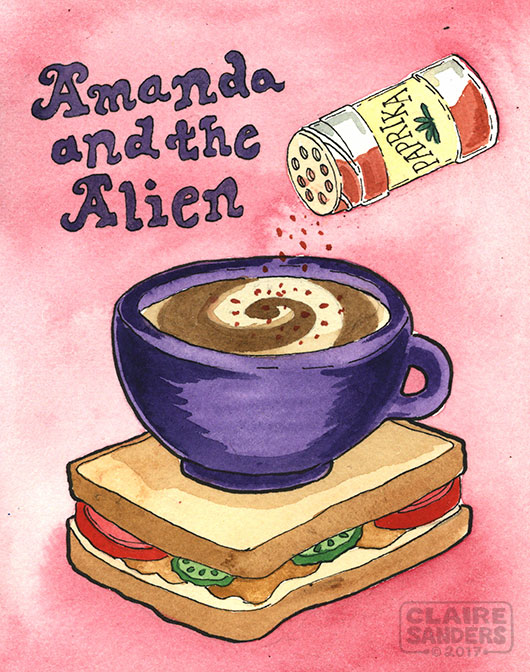 Oakland Military Facility
Two aliens are captured and the military and FBI are trying to figure out how to kill them. In their holding cell, the aliens look like a human man and woman. The woman turns into a leathery blob,  slides under the door and consumes one of the guards. Consume to the alien means that they both eat and take over the body. So the alien is now in a male guard body. The male guard/alien goes to get a sandwich in the lunchroom, that's where it runs into Connie (Alex Meneses). The alien consumes Connie, takes the body and her car and leaves the facility for San Francisco.

Amanda (Nicole Eggert) is a young college student. She lives at home but her parents are gone all the time, so it's almost like she lives alone. She works at a clothing store called the Fashion Mill. Amanda works with two girls who seem to be her friends but she also doesn't seem to like them at all. While they work they all talk about their weekend plans, including poetry slams and raves. Amanda is supposed to hear from her on/off boyfriend Charlie (Michael Bendetti). Amanda is an aspiring artist. Charlie calls to say he's hanging out with his cousin this weekend, that's why he can't do something with Amanda. It's pretty sketchy because Charlie is seen kissing this cousin. Amanda funnels her rage into some terrible art.

Amanda heads to her local beatnik coffee shop. There are a lot of close up shots of lattes, cappuccinos and other coffee drinks being made, along with making sandwiches. Amanda is sketching a woman in the shop, it happen to be Connie the alien's current body. Somehow Amanda knows that this woman is the alien, it doesn't make any sense how.  But Amanda approaches this lady and lets her know that she can help her hide. It's been on the news that the cops are looking for a mysterious person. There is a weird show of the hot coffee cup ripping the skin off Connie's alien hands. Amanda takes the alien Connie home with her. Somehow it's still daytime, this is the longest day.

Amanda helps the alien Connie take a shower, which leads to the alien masturbating when Amanda tells her to wash her private parts. After the shower, Amanda makes the alien a peanut butter, tomato and pickle sandwich. This is where the alien explains that it consumes only live things, like people. That is why it came to Earth in the first place, to see if they could farm it for food. In the kitchen, the alien lady discovers paprika, which causes her to orgasm. The alien lady needs to eat someone, since it's been in this lady body for awhile and it's are getting hungry. First Amanda suggests going to club to meet some dudes, but then Charlie calls because he left some CDs at Amanda's house. Amanda arranges for Charlie to come pick up the CD while the lady alien is there, so the lady alien can consume him.

Amanda heads back to the coffee shop while the lady alien waits for Charlie. Charlie comes over, immediately hits on lady alien, they have sex and afterward she consumes him. During this sex/coffee shop scene, they keep cutting back and forth and they use the milk steamer as a visual for the sex that Charlie and the lady alien are having.

Amanda goes back to the house to find the alien in Charlie's body, and she is very attracted to the body. Amanda takes Charlie to the coffee shop and they meet some of Amanda's friends, who just think it's Charlie. Then Amanda takes Charlie to make-out point, then back home where they have sex. But the cops are on their trail, since the alien is basically killing people, even though they mostly just disappear. The alien has to get to the Hollywood sign to be taken home, but they are currently in San Francisco. They drive to Bakersfield to spend the night. Amanda and Charlie/alien stop at a weird theme hotel and have some paprika sex.

The cops/FBI find Amanda and Charlie/alien at the hotel but Amanda pretends to be the alien while the Charlie body hides in the closet. They take Amanda into custody and lock her in a van, then the alien takes over the Liutentent Vint (Michael Dorn) body. Amanda is in the truck that Vint is driving, they ditch the other cop and head towards LA. Amanda and Vint/alien end up at a truck stop and need to ditch the van. Amanda uses her charm to get a trucker to give them a ride to LA. In the morning they are dropped off near the sign. Emmitt Mallory (Stacy Keach) follows them and once they are dropped off the SWAT team surrounds them. Vint is shot by Emmitt, but the alien is able to consume Emmitt before he dies. The trucker comes back and saves Amanda and Emmitt/alien from the SWAT team and drops them off much closer to the Hollywood sign.

Emmitt turns back into an alien blob, but not before it mind melds with Amanda and gives her an unnamed gift.  Amanda heads back home, she goes on a crazy talk show about peoples with experiences with aliens. She is still working at the Fashion Mill, but she has to get more questioning by the FBI. Her paintings get a little better, perhaps that's her gift from the alien.