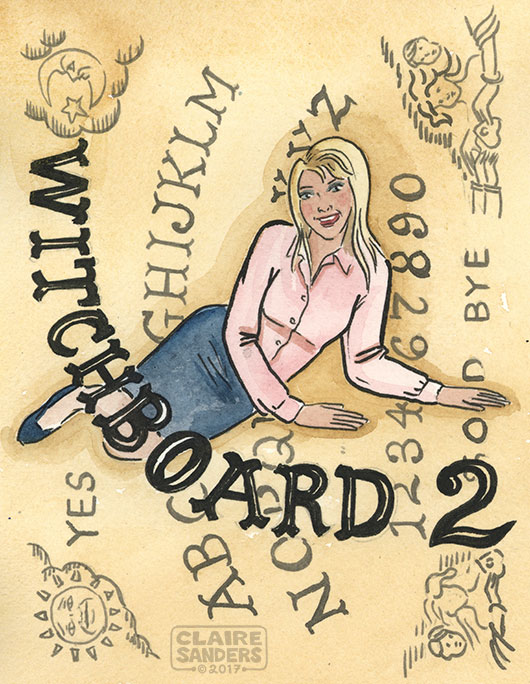 A friend sent me this, even though the first Witchboard isn't very good. It was also a video store promo copy, so it was watermarked at the bottom throughout. Because of that at the beginning of the VHS we got to see the Witchboard 2 trailer plus a horror four pack to sell at your video store. Including Howling 2, The Hills have Eyes 2, Dawn of the Dead and ?Hound of Satan

Paige (Ami Dolenz) is CPA who has always wanted to be an artist. She breaks up with her cop boyfriend Mitch (Timothy Gibbs) moves out and rents an artist's loft. The landlord is super hippy Elaine (Laraine Newman) along with her handyman husband Toby. Elaine's brother, Russel (John Gatins) also lives in the complex, he's a photographer. As Paige unpacks and sets up her place, she finds a Ouija board in the closet. It strangely moves on its own, so she is compelled to give it a try. Using the board, Paige connects with Susan Sydney, a ghost who tells her that Paige will get the promotion at work. Paige is pretty shy at work and Carla, the other woman up for the same promotion is trying to sabotage her. Carla has stolen one of Paige's client files and Paige is aware but can't stand up to her.

Toby is working in the basement of the building when he is attacked by a floating ax and flying saw blades. He escapes into the boiler room only to be steamed to death.

By talking with Susan, Paige gets some confidence to be more assertive at work. She calls out Carla for hiding the file. Then Paige takes up Russel on his offer to photograph her. With her new ghost confidence, Paige start dressing sexier too. All this time, her ex-boyfriend Mitch is trying to get back together with her. Mitch helps look up info about Susan Sydney, since Paige shares that she has been contacting her.

Paige uses the board with Elaine and Russell and they get a hint to where Susan's body is buried. Mitchell doesn't find a death certificate for Susan or a forwarding address, so he's not sure that Paige is really taking to the ghost of Susan. In the middle of the night, Paige and Russel try to find Susan's burial ground, somewhere in the woods. Mitch finds them instead and Russel warns Paige to stop using the board.  Later, Mitch is driving alone when Susan uses her powers to cause a major car accident that lands him in the hospital.

Paige goes to a mystic shop where the shopkeeper gives her a definitive book on using the Ouija board along with a drawing planchette to try to confirm if it's really Susan who is contacting her. Paige has also been having a lot of dreams about Susan, which she has been turning into charcoal drawings, it's really unleashed her creativity.

Elaine is killed in front of her hippy van by a stray wrecking ball. Paige suspects that Russel is the killer, and she goes to his studio to confront him. He seems crazy but says that Elaine killed Susan for having an affair with Toby. Paige locks herself in the darkroom of the studio, with Russel trying to attack her. Mitch shows up and stops Russel, but then Paige is now possessed by Susan. Susan kills Russel and Mitch is pushed out the window but doesn't fall to his death because he gets tangled in some wires. Mitch manages to make it back inside the studio. Susan is half ghost powers, but Paige is still in the body too. Susan tries to kill Mitch, but Paige resists and smashes the Ouija board which unleashes Susan's ghost into the universe. Paige moves out the loft, decides to go to art school and starts dating Mitch again. I guess she isn't convicted on killing Russel since a ghost inhabiting her body did it.

Not great, but I still enjoyed it more than the first one. Paige is a more likable character than anyone in Witchboard but that's not enough to make it a great movie.  I'm surprised that a sequel was made at all, but then again this movie was a low budget cash grab. There isn't much connecting the two movie, but they do both use the concept of Progressive Entrapment as the main premise for the ghost in the Ouija board to be able to take over a living body, so that's something.
Posted by Claire Sanders at 7:00 AM